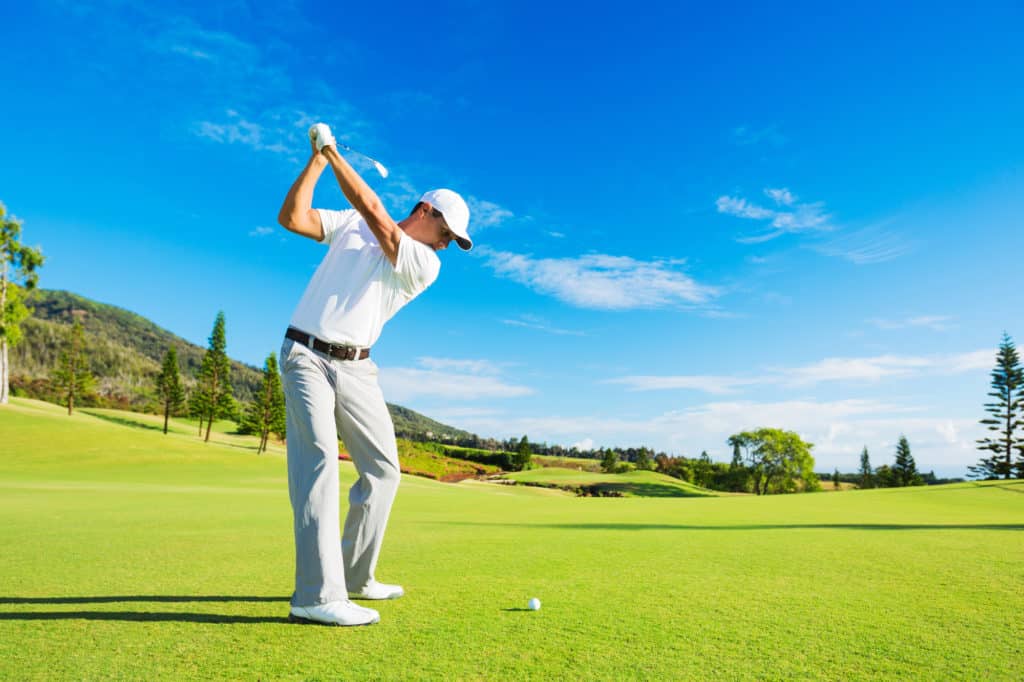 The two most talked about misses in golf are the hook and the slice.

These two shots are the most frustrating for golfers and cause some people to want to quit the game altogether.

There are some significant differences between the hook and the slice, and they are caused by different things as well.

If you have ever been confused by the hook and the slice, or you want to find out why you are hooking or slicing, then you are in the right place.

What Is the Difference Between a Hook and a Slice?

A hook is a shot that starts straight and then makes a significant turn to the left.

The hook shot always starts on its line and travels on it for quite some time before it makes the turn.

A slice is a shot that starts straight and then makes a significant turn to the right.

The slice will stay on its line for quite some time before it starts to turn.

Both of these shots can be very difficult to watch as they stay more direct towards their target, and then you have to watch them turn away.

There are several combinations of the hook and the slice that you may also see golfers refer to.

A draw is a shot that starts straight and then makes a very subtle turn to the left.

The draw is considered to be a good shot most of the time.

Many players plan to hit a draw as it can be a great way to approach a pin.

Shots that are hit with a bit of a draw also tend to travel the proper distance or a few yards too far at times.

A fade shot is a ball that starts straight and then takes a slight turn to the right.

When you look at the turn a fade makes, you will notice it does not turn nearly as far away from the target.

Fades can be used at times to approach a pin on the right side of the green.

A fade will sometimes go a couple fewer yards than a draw, but it should land in the same general vicinity as a straight golf shot.

A push will go directly to the right as soon as the ball leaves the clubface.

A push can travel on an angle that ends up going very far to the right or just slightly to the right.

The main difference between a push and a slice is that a push never goes straight.

A pull is the opposite of the push.

The pull shot goes directly left and stays on that line the entire time.

The pull shot tends to be a bit powerful and can cause you to go very far to the left.

Pull shots are caused by a number of different reasons.

As we mentioned, the pull shot goes directly left and stays on that line.

If you hit a shot directly left that keeps on turning left, this is a pull hook.

Pull hooks can get ugly.

Since a regular hook starts out straight and turns left, your ball may still be in play.

With a pull hook, the ball starts out left and then travels even further left.

When all is said and done, the ball is going to wind up very far left of the target.

These shots will most likely end up out of bounds or on another fairway.

Luckily, a push slice is not a very common shot in golf. You will be more likely to see a standard slice than a push slice.

What Is a Hook and a Slice for a Left-Handed Golfer? 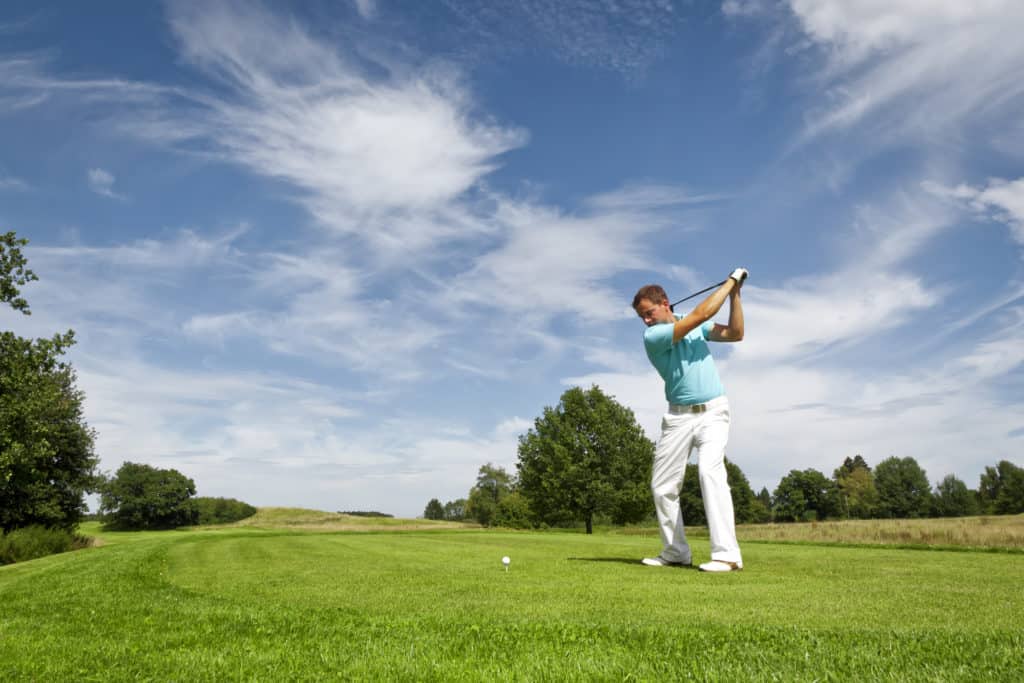 For left-handed golfers, everything is backward.

If a lefty says they are slicing the golf ball, the ball is starting on the line and then heading to the left.

If a lefty says they are hooking the golf ball, the ball starts on the line and then heads to the right.

Lefties have to switch everything around, including the fixes for hooks and slices.

What Causes a Slice?

Unfortunately, there are lots of things that could be causing a slice to occur in your game.

Luckily, some of these are issues that can be fixed rather quickly.

Whenever you hit a slice, chances are your clubface is open at impact.

Sometimes the clubface is open because a player never released the golf club.

The open clubface is the leading cause of a slice, but there is usually an underlying issue which causes this open clubface problem.

If your grip is not excellent, then you could be slicing the golf ball.

Some golfers tend to have their hands on the grip in a way that leads the clubface to stay open at impact.

Take a close look at your grip, make sure it is in the fingers, and all of the proper lines and angles are in place for you to be able to hit the ball straight.

The swing plane is the angle the golf club swings back and through on.

If your swing plane comes from the outside or over the top of the swing plane line, you can often see a slice.

What happens with these plane issues is that the clubface is left wide open with no time or room for a player to turn it over.

Golfers who have swing plane issues should feel as though they take the club just a little more shallow and a little more inside on the way back.

They may feel as though this gives them the feeling they need to release the golf club properly.

When you swing a golf club back, the connection is essential.

Your arms and body should stay connected as you swing back and through.

Of course, the physical connection will always be there, but if they were not working together and timed properly, there will be issues with ball flight.

Golfers who start their swing by taking their arms back without moving their bodies at all could struggle with this issue.

Make sure your arms and your body are always working together, and it will be much easier to square up the clubface at impact.

What Causes a Hook? 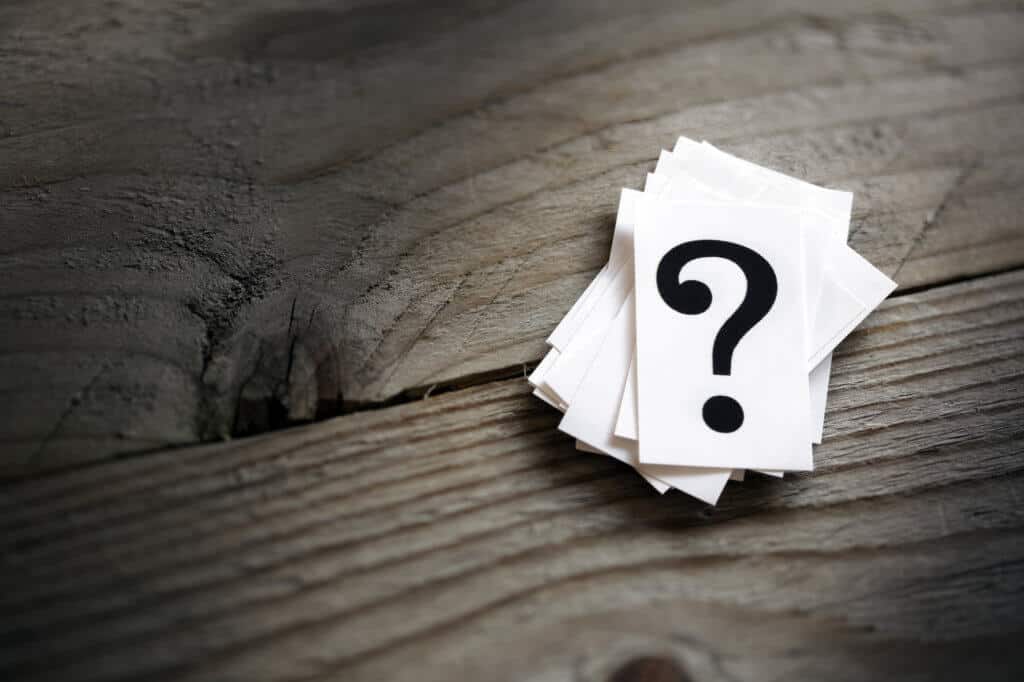 Just like a slice, a hook can have several different causes.

Hooks tend to be a little easier to correct than a slice.

A hook is usually the result of a closed clubface at impact.

Here are some of the main reasons your clubface could be closed.

Just like a slice, if your hands are not in the right place, you can be prone to a hook.

Make sure you analyze the position of your left hand as well as your right.

Many people tend to focus on where their right hand sits on the club and not the left.

Some golfers will hook the ball because they don’t transfer their weight forward as they come through impact.

If your weight hangs back on your right foot, but the club keeps traveling through, then chances are the clubface will be closed when it gets to the impact position.

Golfers who have trouble with this concept should be working on moving the weight of their left foot just a little sooner.

As soon as a golfer hooks the ball, they will then be afraid of the hook.

This is entirely normal and happens to the best of us.

The problem is, once you start setting up to prepare for a hook, you can make a hook worse.

Golfers who aim to the right and play the hook will end up swinging around themselves and causing an even larger hook.

If you have started to hook the golf ball, check your plane, check your clubface and your alignment.

Do not start trying to accommodate for it by aiming further right and adjusting your swing.

Sometimes golfers will set up with their clubface slightly closed.

This can be done to avoid a slice, but the problem is that it could cause a hook as well.

You should always set up with your clubface square and plan to hit a straight shot.

If you have to manipulate the clubface at impact, then you are already starting yourself off in a bad spot.

What Is a Better Miss: A Hook or a Slice?

There is quite a bit of debate about what the better miss is in golf.

Most lower handicap players and professionals will tell you that a hook is a better miss.

When you hook the golf ball, it tends to still go a long way, and although you will be in the left rough, you may still have a chance to get to the hole.

When you hit a slice, you will lose a certain amount of distance.

Since your distance is affected as well as your direction, a slice sets up a lot of bogeys.

Another reason the hook is considered to be a better miss is that, with the hook shot, a player has usually released the club, but their timing was just off.

The player’s clubface could also be closed slightly, causing the hook.

With a slice, chances are the clubface was never released, and it is just still wide open.

This usually means a player does not have some of the basic golf fundamentals and movements down to get them to hit the ball straight eventually.

In other words, the hook is usually an easier miss to fix than a slice.

Sometimes golfers will have a round of golf where they slice a few shots, and they hook a few shots.

This is common with players who have some inconsistencies in the golf swing and game.

Why Do Beginners Tend to Slice the Ball? 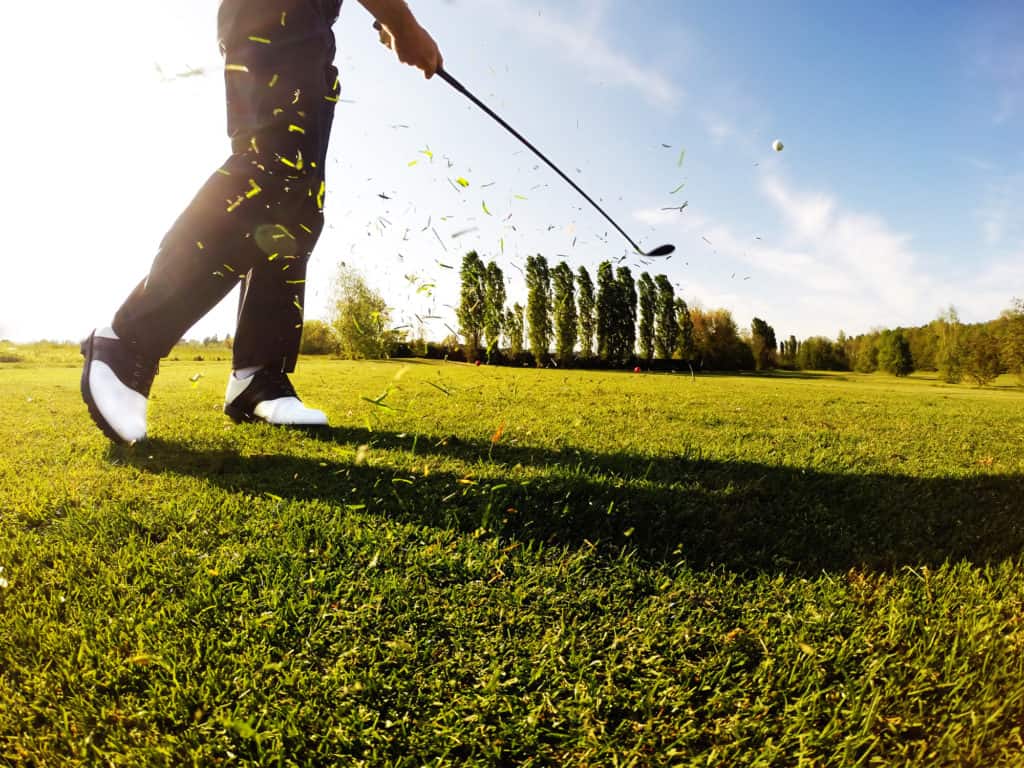 Beginners will tend to slice the golf ball because they have not learned how to release the golf club.

Learning to turn the clubface over and take the club from open to square to closed takes a bit of time.

This is a feeling that comes more naturally in other sports, and for most golfers, this is going to be a learned move.

Overcoming a slice is a rite of passage when it comes to being a beginner golfer.

If players work on the right drills and learn to slow their timing and tempo down, they will eventually learn to release the golf club.

Overcoming a slice and learning how to hit the golf ball straight is one of the greatest parts of learning golf.

A hook and a slice are basically opposites of one another.

Don’t let this make you think you are immune to hooks if you are new or vice versa.

If you watch professional golf, you will see that even the best players in the world hook and slice the ball from time to time.

To hit a golf ball perfectly takes quite a bit of precision and effort.

With a fast swing speed, your impact may only be off by a centimeter, but it could cause a major miss.

It’s essential to learn how to control your golf shots and to learn what fixes a hook and a slice. 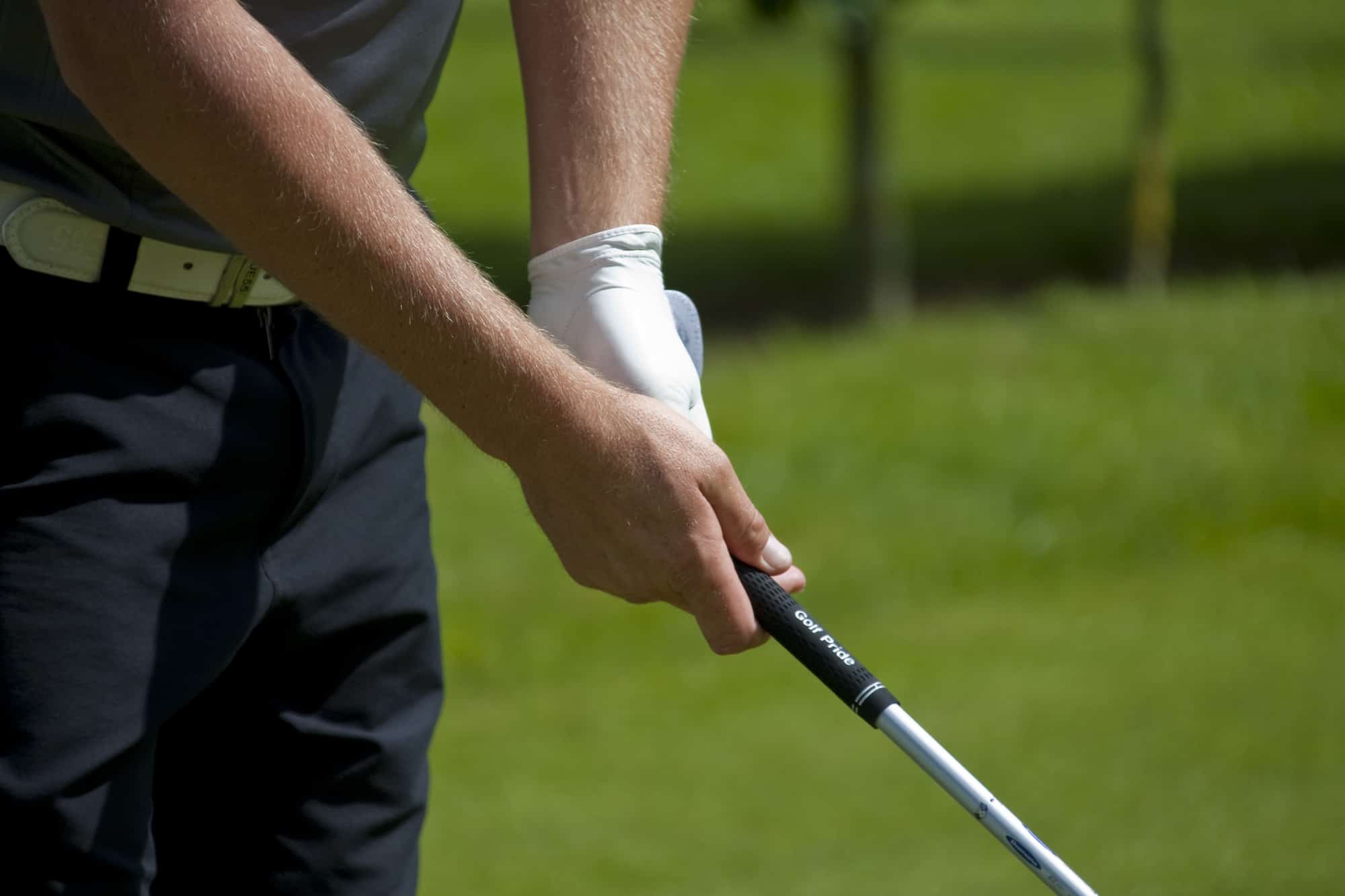 What Happens If An Amateur Wins The Masters? (Explained) 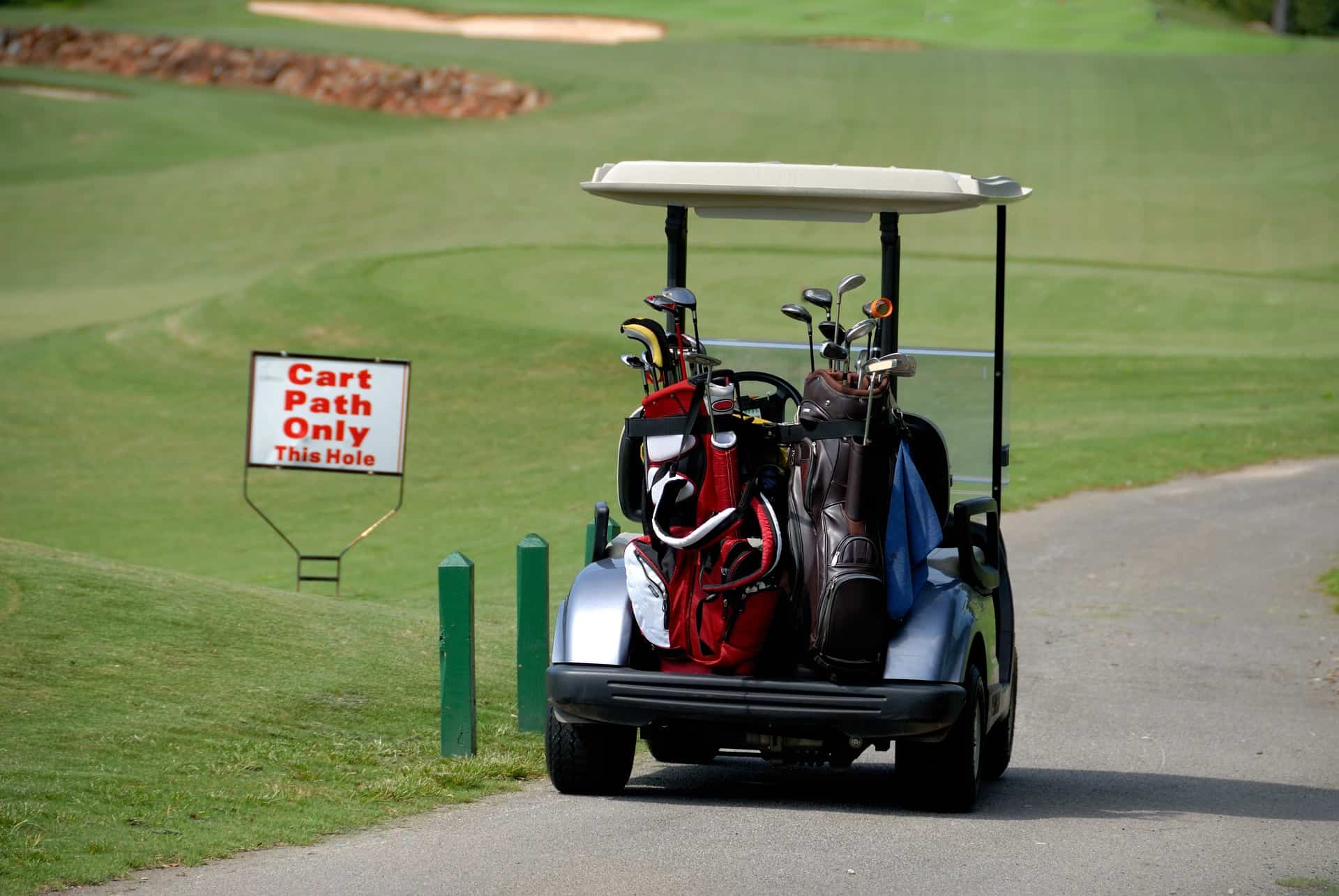